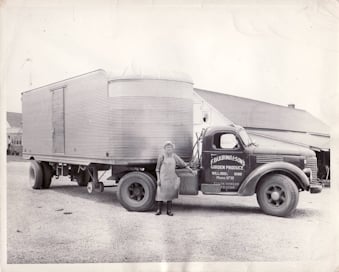 Buurma Farms, Inc. is a privately held corporation with farms in Gregory, Michigan and Willard, Ohio. It was founded in 1896 by Frans (Frank) Buurma, a Dutch immigrant. In the early 1890’s, Frank worked as a farm laborer in the celery fields near Kalamazoo, Michigan. Word came to him that swamp land was available for purchase at modest prices in an area just south of what is today Willard, Ohio.

Frank and a group of other Dutch immigrants (including the Wiers, Crammers, Coks, Molls, Holthouses, Van Zoests, Shaardas, Koks and Postemas) decided to move to Ohio and begin the hard and tedious job of draining this swamp land. The group built dikes and canals to drain the swamps to get to the fertile muck below. After this task was completed, they divided up the land and formed their own farms.

Frank Buurma’s farm consisted of only 4 acres and celery was the only crop. (Celery was the main crop for these immigrant farmers; hence, the community came to be known as Celeryville.) When Frank passed away, his four boys (John, Gerry, Hank and Anco) managed the farm and grew its size by buying out the smaller farms that were having financial difficulties.

As time passed, the 4 Buurma brothers added more vegetables to the mix as their acreage increased. Their families worked at the farm and helped it expand. Most of the small, original farms were bought out. Eventually, all of the muck land in Celeryville came to be owned by just 4 farms: the Buurmas, the Wiers, the Holthouses and the Stambaughs.

In 1976, Buurma Brothers (as the company was known) bought around 1200 acres of muck land near Gregory, Michigan to go with the 800 acres in Celeryville. By this time the Buurmas were growing around 20 different crops. In 1982 the farm incorporated and Buurma Brothers became Buurma Farms, Incorporated.

Currently, Buurma Farms, Inc. farms close to 2500 acres. About 30 different
crops are grown and another 30 or so are marketed. Crops grown include
radishes, beets, lettuces, parsleys, southern greens, sweet corn, green onions and celery. (Interestingly, celery is no longer grown by any of the farms in the Celeryville area due to certain soil diseases. However, Buurma Farms, Inc. does continue to grow celery at its Michigan farm.) There are now 12 Buurmas that actively own the operation. There are 6 younger Buurmas that are full time employees. The farm employs upwards of 500 workers during the busy summers.

Buurma Farms, Inc. packs its fresh produce under the “Buurma” and “Holland Brand” labels. The company ships around 2,000,000 packages annually. Most of its customers are in the major metropolitan areas east of the Mississippi River. Even after 100+ years in operation, Buurma Farms, Inc. still strives to sell only the finest in fresh vegetables.